Baby Clothes Quilts
THREE of them
One of my friend's asked me if I'd be willing to make her three quilts made of her three daughter's baby clothes. I told her I'd look into it and get back to her. After lots of research online I found that to have these made in a lap-sized quilt they can run anywhere from $300-$500!
Her girls are 10, 13, and 15 and she'd been hanging onto these clothes for all these years to have them made into quilts. I thought, "How hard can these be. I'll do it!" So she brings me the clothes and a couple days later, I go through the huge Rubbermaid bin. Oh NO! 85% of it is all jersey knit stuff, 5% is sweaters, and the rest is cotton fabric. Then in the bin are 3 bags with specific outfits for each girl in each bag. Each bag contained their "coming home" outfits (all jersey knit stuff in newborn size) and then some t-shirts and sweaters. oh....what a challenging project I have ahead of me! These things have been hanging over my head for so long. I've had this bin of clothes for almost a year!
I'm determined to get them done this month. I've got the first one just about done. I took a sneak peek picture last night to send to my friend and she loves what she sees so far.
Honestly, I'm not super crazy about them because the clothes I had to work with was so limited and not my choice of fabrics, patterns or colors. But I've added some of my own fabric and did the best I could working with some of those knits (and no sweaters! you just can't cut up a sweater and incorporate that into a quilt!)
Hopefully I'll have all three of these done soon to show you.
I've learned one thing...I'll never make another one of these again.
(Except for the ones for my girls but I was smart and ONLY saved cotton clothes!) 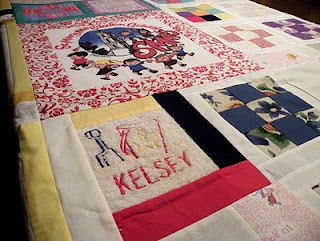 Who knew?!? He actually had some good suggestions!
Let me first give you a little background on my husband.
He's a "man's man".
He flies in an airplane for a living. He hunts. He fishes. He rides motorcycles. He shoots guns. He watches and plays most all sports. He breaks bones in his body. He's just your typical guy...the kind of guy with absolutely no feminine side to him. (poor guy, and he lives with 3 girls and a female dog!)
Anyway, he tolerates my fabric and quilting obsession. I was a little worried with this last move we made. See, he was in Afghanistan for about 8 months and I think I used fabric as my therapy. Once we moved, he actually SAW all the fabric. He asked me, "So, what do you think you spend a month on fabric? $1,000 per month?" I replied, "NO WAY!" (really I don't! I don't know what I spend but I do know it's not that much!) Anyway, he's great about it and makes it a joke. Which I love because sometimes I feel a little guilty about how much fabric I have and the fact that I don't have any income coming in. But he knows my job being a stay at home mom is rough when he is gone so much, and this is really my only hobby.
Ok, let me get back on track here....
I love Cathedral Windows Quilts. I've always wanted to make one and was always intimidated and thought I couldn't do it. I received a coupon via email from Joann's for 60% off a single cut of fabric. I thought it'd be a good time to get some muslin for one and attempt it. I bought 6 yards. (come to find out later, for the size I want to make I need 20.5 yards!! OOPS!) oh well, it'll get me started anyway!
So I cut some white, cut some charms, and start ironing away. Boy is it a lot of work. 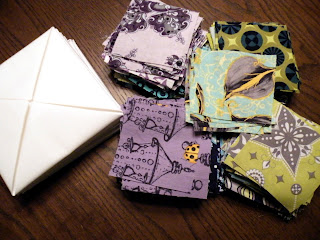 My whole reason for wanting to make a Cathedral Windows quilt is because at night after the kids go to bed, I don't sew. That's when hubby and I watch TV together. We DVR a ton of shows and it's the only time for us to watch them. I usually sit on one couch and play on the computer checking blogs, flickr, pinterest, facebook, etc, etc. Well it's ridiculous. I think about the hours I sit on this damn computer and I could be sewing something instead. For whatever reason, I don't like to quilt, sew on my machine, cut fabric etc. at night. That's what I like to do during the day.  So hence me coming up with starting a Cathedral Windows quilt. I can sit here and watch TV and hand stitch my little windows into the quilt. 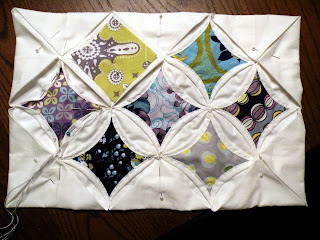 I sit down to start and say to him, "you know what, if I just machine stitched all these, it would be so much faster." He replies, "Isn't that defeating the purpose though? You aren't in a rush. Take your time and enjoy it."
Wow....he was so right! I know most of the time, all my jabbering about fabrics and quilts goes in one ear and out the other with him. He could care less. I know when I start talking about quilts, fabrics and blogs, he probably says to himself, "oh gosh, how long is she going to go on about this crap."
So I start hand stitching with regular thread. I don't like it. Then I try stitching with some perle cotton thread and I'm just not sure. I can't figure out how the stitching "is suppose to be." So again, I ask his opinion. "Which one do you like better? The one with the thread you can barely see? or the one with the thicker thread that is pretty visible?" He says, "The thicker thread, obviously! You aren't going to do all that hand sewing and then not even be able to see the quilting! I mean, if you're going to hand quilt this whole thing, don't you want the stitches to show?"
YES!!! He was so right! I couldn't believe I didn't come up with any of his conclusions on this quilt!
So with every tedious step on constructing this quilt, I am learning to really appreciate every moment of it! 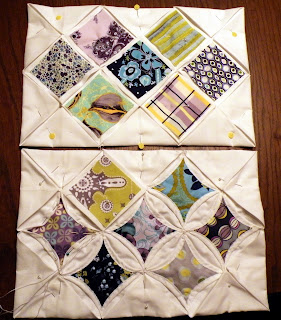 Yep, it's the big one.
The start of Mid-Life, Right?
or is that 50?
Regardless, for some reason, this Birthday is kinda freaking me out!
The sound of being 40 just sounds old to me.
I still feel 24.
So I guess that's all that matters, right?
I went away this past weekend with my husband to Foxwoods Resort & Casino in CT to celebrate. We had a blast and it was so nice to get a kid-free weekend!
When I returned home, I had received some goodies in the mail from Crystal.
First up...a lovely mug rug 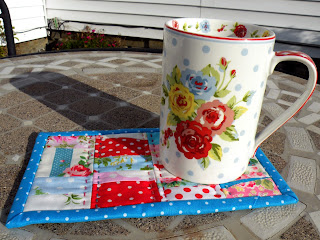 How awesome does my mug look on that mug rug?
Then....a mini quilt 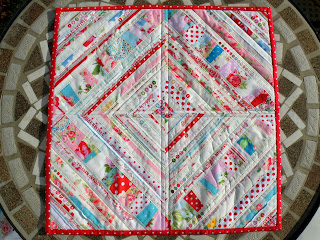 Then block #1 of the Dresden king sized quilt we are making for my bed. She completed the first block and I'm so in love with it! It's pure perfection! Nothing like looking at this to motivate me to get my butt in gear and start making mine! We're making a total of 25 Dresden Plates with Crystal picking up most of the slack and making more than half! She's such an awesome girl! I can't believe this will be on my bed someday! Super excited! 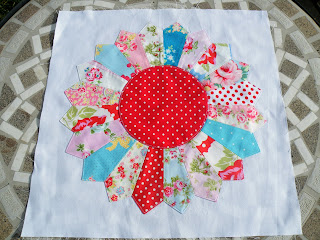 The mug rug and mini quilt were all made with scraps from the Dresdens.
I love everything! Thank you so much, Crystal!
Posted by Jen at 6:24 AM 11 comments

Here's the *November Edition* of the "12 months of mini quilts" for Crystal. 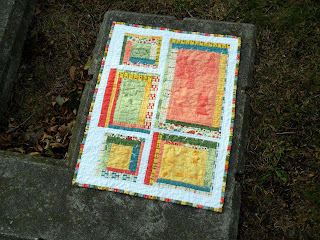 As I mentioned in an earlier post, I'm making Crystal a mini quilt a month, for a year. The reason I'm doing this is because I'm making a King sized quilt of Dresden Plates made of my coveted "Flower Sugar". I knew that was the fabric I'd use but couldn't decide on a pattern. Crystal helped me design the quilt top, cut the fabrics, and she's even making more than 1/2 of them for me! So anyway, my way to thank her was to make mini quilts for her. She's using them to hang in her studio where she sews. 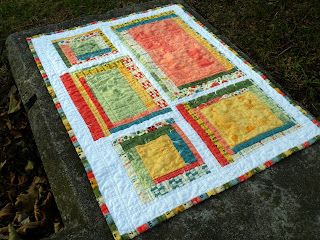 So that brings us to this mini quilt. It's made with "Tailor Made" by Cosmo Cricket. The fabrics are so cute and all "sewing" themed. They are just real hard to see in my pictures! I forgot to measure it but it's approximately 19"x25" (that would be my guess!).
Posted by Jen at 3:01 PM 2 comments